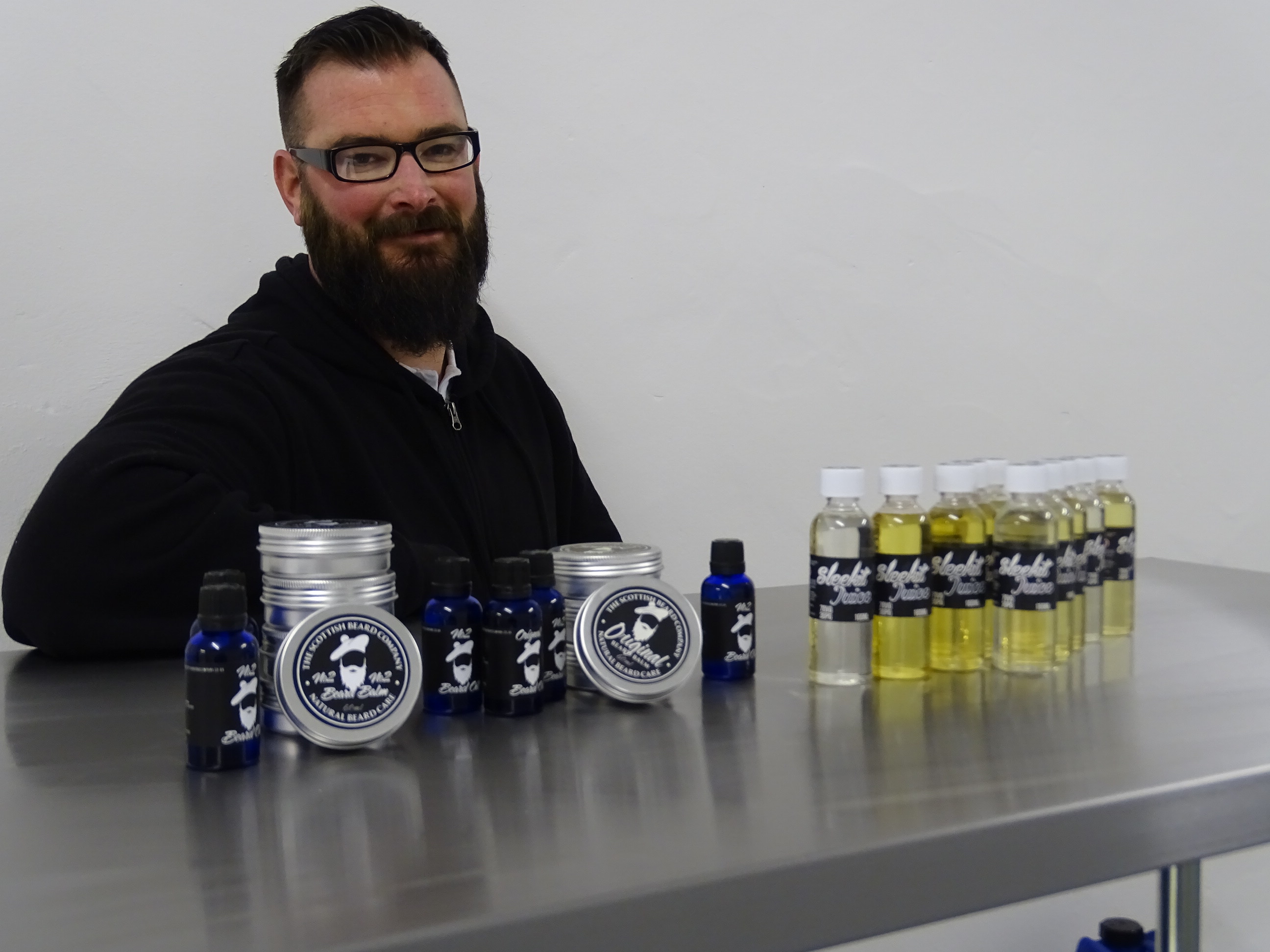 Filling a gap in the market for affordable e-liquid has helped Andrew Stevenson create a business that is set to take on its first employee to help deal with global demand.

Having worked as an electrician in the Middle East and Canada, the 34-year-old returned to the area in 2014 and quickly realised making his own e-liquid would save him money.

After developing his own recipes, he began selling his product to friends and quickly its popularity grew, sparking the idea for Sleekit Juice last April.  Initially creating his range of products in his kitchen, he moved into his first unit to get the space he needed to deal with orders from across the UK, Norway, Holland, America, Israel, and the Far East.

Less than a year on Andrew has just moved into his third premises at The Trade Centre, Alloa and with the help of Business Gateway Clackmannanshire, is looking to take on his first employee.

He said: “My initial thought was I could sell the product to friends which would then cover the cost of buying my own, but it’s just grown arms and legs and the amount of hours I’ve put in is ridiculous. Having found my new unit, which gives me more than double the space I currently have, I knew I needed an extra pair of hands.

“I was on Google thinking there must be an organisation out there that can help me with the whole employment process and I came across Business Gateway. I filled in a contact form and got a call that week. My adviser came out to see me, discussed what I needed, and since then has been a massive help, explaining what I need to do to ensure I comply with all the regulations and create a good contract. She’s also going to help me with the interview process.

“Without that help I’d probably have got it all wrong! Now I am confident everything is in place and that I’ll find the right person to help me grow the business in a more manageable way.”

Mandy Campbell, Business Gateway, said: “Spotting a gap in the market has helped Andrew create a business that has grown from strength to strength. He came to us because he needed expert help and guidance to create local employment. He now understands what he needs to do to be a good employer as well as protect his enterprise. We will also provide health and safety advice once he is up and running in his new premises.”

Moving from the excessive heat of the Middle East to work in Alberta’s oil fields meant Andrew faced minus 45 degrees during the bitter Canadian winters, which was a shock to the system particularly because he had to be clean shaven to comply with safety regulations.

On his returned to Scotland he decided a beard had to be in his life, and after buying multiple beard balms only to find them full of chemicals he decided to make an all-natural beard care product himself.

After launching Sleekit Juice he realised there was also a market for his balms and www.thescottishbeardcompany.co.uk was launched at the end of last year.

He said: “I’d been paid well while away and cigarettes were a lot cheaper abroad, and that’s what inspired me to make my own e-liquid. Before starting Sleekit Juice I think I was blind to opportunities but now I’m more switched on and think differently. That’s why I launched the Scottish Beard Company. I saw the potential in creating my own all natural beard care products which are already a huge hit in America. Now I just need to crack the Scottish market.”

To find out how Business Gateway Clackmannanshire can help your business call 01259 726430 or visit www.bgateway.com/clackmannanshire.