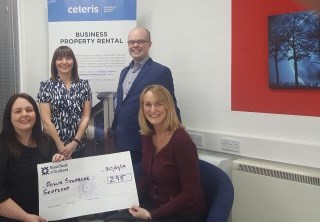 Ceteris were delighted to present a £295 cheque to Down’s Syndrome Scotland recently.

This money was raised by the annual Ceteris Tenants Christmas raffle and collected by Morag Dalrymple, Family Support Service Officer from Down’s Syndrome Scotland, who covers the Clackmannanshire area.

Ceteris chose this charity as employee Stuart McCusker has a young son who has Down’s Syndrome. Stuart said, “ I was very touched that my colleagues picked Down’s Syndrome Scotland to be the beneficiary of our raffle this year. The charity have offered constant support and advice to our family since Liam was born and I’m delighted that we were able to raise this money for them”

Down’s Syndrome Scotland provides “all through life” support nationally across Scotland.  They work to help people with Down’s syndrome reach their full potential by providing information and support to them, their families, carers and professionals at whatever age and stage of life. They also work to influence government policy to ensure that society reflects the needs of people with Down’s syndrome.

Ceteris would like to thank all who bought tickets and the more than 30 local businesses who donated prizes. Down’s Syndrome’s Scotland were not the only beneficiaries as the Ceteris team and their Tenants also raised £160 for Save The Children’s Christmas Jumper Day.