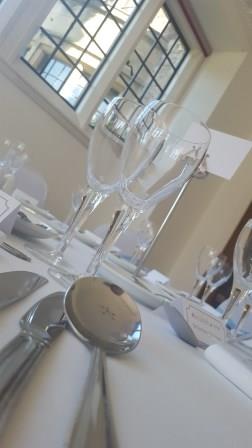 Each Friday during our 4-week  Career Ready Internship with Ceteris, we will publish a blog about the week’s activities.

During the first week of our internship, we had something different to do each day.

During our first day we spent the morning touring the Alloa Business Centre, which allowed us to see all of the Ceteris departments, which gave us the chance to be introduced to the staff in those departments.  This was great as it gave us both a better understanding of what the company does, how many tenants they have and the services they offer.  It was also very fascinating to observe the role each member of staff had in their department.

On Tuesday, we were based at the Gean House doing inventory with Ann Marie.  After a while we headed to the Dunmar House to attend an event which was about woman in business.  Chloe and I were in charge of providing people with leaflets in order to get their name and signature.  Afterwards, we listened to Kate Donne speaking about woman in business and then we were able to hear her read part of her book: “The Wit and Wisdom of Bobby ‘Chicken Legs’ Muldoon”.  It was really interesting.  Shortly after the event we headed back to the Gean House to finish doing inventory.

On the third day of the internship I was without Casey in Gean House.  There was a wedding on the following Saturday so there was a lot to do.  I constantly had something to do, whether it was putting covers on chairs, setting out glasses and mugs, hoovering rooms and hallways or ironing and folding 67 ribbons!  Other than the constant work to do the staff at Gean House were very welcoming and understanding, they were always so polite and kind to me. The breaks were good too! Always got a cup of coffee and a biscuit. By the end of Wednesday I was exhausted, I was constantly on my feet and working to make everything the best that I could do. On Thursday it was more office related work, I was using the guillotine to slice the wedding menus and then I was folding the order of service papers for the Saturday wedding. I was also tearing out, folding and then sorting the name tags for the wedding that was next Saturday. I was also given a series of tasks to do by Fran (who was in charge at the time) like fake enquiries, scenarios and what I would suggest to a customer for an event. My overall experience at Gean House has been very pleasant and eye opening as I myself want to go into the hospitality industry so this has given me a glimpse of what it would be like to work/run a hotel.

On Wednesday I was at the Alloa Business Centre reception and Chloe was at Gean House.  I was at the ABC in the morning then the e-centre in the afternoon.  I shadowed Karen and Sophie as they showed me how to organise the mail, book rooms on the computer, answer the phone etc.  Sophie also showed me how to set up the teas and coffees for courses been held at the ABC.  After lunch, I was down at the e-centre working with Zoe.  She showed me how to use the franking machine and allowed me to put the mail through.  I also organised the Fire Folder to make sure it was in the correct order.  When I had finished I was able to have a read through some of the folders which gave me a good understanding and more knowledge of other things the company does.

On Thursday morning I was at the e-centre with Cathy, she was very lovely. In the afternoon I was at the ABC with Karen and Sophie doing reception again.  We went through the same tasks as we did on Wednesday, both at the e-centre and the Alloa Business Centre.  The ABC reception was busier than the day before so I was able to see how Karen and Sophie helped the tenants.  It was good to see how the company helps the tenants and I had great pleasure working with Zoe, Cathy, Sophie, Karen and Karen! My experience working in reception was interesting and different.  It was great to see and do the role of a receptionist as it gave me an insight as to what a receptionist does.  Although it may not be the role for me, for the two days it was great being able to have that experience and work with such amazing people!

On Friday we were both working at the office.  Our tasks were to write and publish our weekly blog, sort the old notebooks and continue researching events on the Business Gateway website.

See you next week!